New to the BLRL: The Future Dictionary of America

The Future Dictionary of America 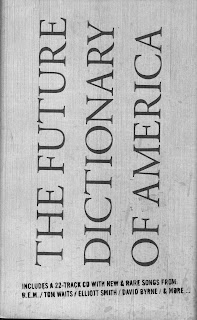 I'm going to be honest with you: I have no idea how to write about this book, as it's not your run-of-the-mill dictionary. In brief, the book contains hundreds of words (some already in circulation, some newly minted) by a sizeable list of contemporary writers in the McSweeny's orbit. The book was published in 2004 "to benefit progressive causes in the 2004 election," which means it leans liberal and to the left. That's not my perspective. As it says at the beginning of the book's introductory note:

This dictionary was conceived as a way for a great number of American writers and artists to voice their displeasure with their current political leadership, and to collectively imagine a brighter future…. Thus, all proceeds from the sales of this dictionary go directly to groups expressing their outrage over the Bush Administration's assault on free speech, overtime, drinking water, truth, the rule of law, humility, the separation of Church and State, a woman's right to choose, clean air, and every other good idea this country has ever had.

The other thing that makes this book interesting, aside from it's peculiar mix of new and existing words and phrases, is the authors'/editors' proclamation of language's importance in the age of YouTube, with its influencers and cat videos, and their awareness that, while publishing a dictionary in the 21st century might be something of an anachronistic approach to consciousness raising, it's the anti-literate who are most at risk.

I won't say any more. I can't. This book is just something that has to be held and leafed through and absorbed to be fully understood. Ironically, attempting to its encapsulate its essence in mere words falls short. I will, however, leave you with the following excerpt from the book's front matter, which appears under the heading, "Does Our 2Ist-Century World Need Such a Dictionary?"

With the advent of telepathy and other forms of direct comprehension, many have questioned the relevance of this book. Indeed, in an age when mental transmission has replaced articulation as the primary form of expression for fully three-quarters of America's eleven billion citizens, it is often thought (and by extension said, to everyone) that a dictionary that remains rooted in the descriptive tradition, carefully cataloging the words of our age as they emerge and attempting to establish a standard set of spellings and usages, is essentially obsolete, its editors engaged in a wasted effort. It is the belief of the editors of this edition that such ideas arise out of the minds of idiots, or alien infiltrators. 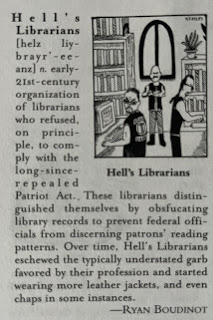 In this, the sixth edition since 2016, we offer the reader an array of new and useful terms. While the average dictionary user is most likely a student, a time traveler, or an aficionado of historical reenactment, our intended audience is much wider. Those who maintain a professional interest in understanding the English of our day will find a great resource here, but so shall every other man, woman, or genetically-enhanced/sentient plant who wishes to look. Language remains an essential element of modern life; those who ignore its importance, who view it as a curiosity, relegated to the past along with poverty and gravity, simply persist in living In ignorance. In darkness. They too will learn.

For those who have not retreated to customized dimensions or cryogenic stasis-those who wish to engage with the world as it is now--the new terms included here offer a striking picture of our time. Many old meanings and outdated words have been excised, in order to accommodate the au courant intellect, eager to learn only the most recent developments in diction. What is left is an alphabetical adumbration of the modern era, one that reflects the concerns and ambitions of the modern human.

Note: This dictionary came with a CD featuring 20 or so "alternative" or "indie" bands. Since I got this book used, the CD that was supposed to be with it was long gone.