It’s a dark night in a city that’s forgotten about its dictionaries. But on the first floor of a two-story house in Laurellia, one man is trying to find meaning in a world awash in words: Guy Verbose, Existential Lexicographical Private Eye 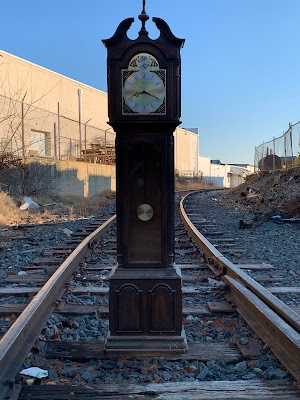 I typically don't remember my dreams, which is probably for the best since I lead a pretty dull life. But on this morning, when I opened my eyes I had a distinct memory that I attended a funeral for a friend of Charles Bukowski.

The ceremony took place in a rundown bookstore that shared a wall with an equally run-down diner. There was an opening in the wall so that patrons of each business could go back and forth and they did. A lot of the people in the diner were reading books, and I saw a few people from the diner wander over to the bookstore after they paid for their meals. It was a nice arrangement.

I got to the funeral late and when I spotted Bukowski among the crowd of mourners, I went up and asked how he was doing. In lieu of an answer, he responded to my question with one of his own.

Bukowski looked me dead in the eye, gauging my sincerity, and then exhaled cloud of cigarette smoke that enveloped us both.

As the smoke cleared, my eyes drifted up to a video memorial playing on a 1970’s-era black-and-white television suspended from the ceiling. The video showed a series of pictures from the deceased’s life, most of which were candid shots of men in slacks with cigarettes in their mouths and a beer in hand.

After what seemed like a long time, Bukowski turned to me and asked, “Do I know you?”

“What do you mean? Of course you do." I said with a tinge of embarrassment. “Don’t you remember? We used to sit at that table right over there against the wall. We’d drink the shitty coffee they serve here and talk about books.”

Before he could answer, a man sitting at a booth in the diner waved Bukowski over.

“I’ll be right back,” he said as he emitted another cloud of smoke.

Standing there alone, a fish out of water, I was forced to admit I didn’t know Bukowski and that we'd never hung out here or anywhere else. I read about the funeral in the newspaper. Somehow, I knew Bukowski and the deceased were friends, so I decided to show up so I could be seen with Bukowski and bask in the reflected glow of his fame and credibility. Why I tried to fool him, or even thought that I could, I couldn't say. I didn't think I was the kind of person who did this sort of thing. Realizing I was made me feel lousy.

Suddenly, the dream shifted and I found myself supine on a worn pleather loveseat in the lobby of a dingy hotel. There were no tables or bookshelves, but I knew it was the same building that housed the bookstore/diner.

A blanket was draped over the lower part of my body, which told me I'd been sleeping there. I was grateful to have the blanket because I wasn't wearing any pants.

A toothless and wrinkled old woman sat in a lounge chair nearby. She was wearing a dirty nightgown and shower cap, and smoking. Without asking, I grabbed her matches and used one to light the cigarette I just rolled. The cigarette paper was too thick and I couldn't get the seal to adhere. I licked it a few more times and lit it anyway. I got only a few puffs before it began to unravel and shards of tobacco ended up in my mouth.

The television—the same one from the bookstore/diner—was showing a movie starring Al Pacino. Pacino was playing a grizzled detective and, at the moment, someone off-screen was shooting at him.

“That Pacino…,” yelled the old woman to no one in particular. “Who the hell does he think he is?”

I nodded approvingly, although I'm not sure why. I wasn't familiar with the movie and I didn't really care about it because I had bigger problems, like how to get  my pants back on without anyone noticing. Then it dawned on me that I didn't smoke and that the shards of tobacco in my mouth tasted awful.

I have five dream dictionaries in my possession and not one has anything to say about the meaning of dreams in which you try to befriend a famous writer. They do, however, offer a few words on dream-based deception. The best of the lot—Theresa Cheung’s Dream Dictionary from A to Z—opines: “If you find yourself lying or cheating in your dream, or you hear someone else doing so, this indicates that you’re feeling guilty about not being honest in your waking life.”

It's a similar story regarding underwear.

Generally, underwear in a dream is though to be a symbol of your hidden attitudes and prejudices. If you dream of feeling embarrassed about being seen in your underwear, it may suggest an unwillingness to reveal your true feelings, or have your opinions made public.

The book goes on to say that dreams of being naked or inappropriately dressed, “involve feelings of exposure and vulnerability, and often include an element of embarrassment or shame.”

So, what am feeling guilty or not being honest about in my waking life? What feelings am I hiding? What am I embarrassed about? Before I answer that, it’s important to note that, according to Cheung, dreams are not to be taken literally.

You need to do a bit of detective work to get to the real message. Just because you dream that a friend is dying does not mean that he or she will die, but rather that they are going through a period of enormous change. In fact, interpreting dreams literally can be harmful. You have your own set of unique dream images and symbols. If you love dogs, what a dog means to you and what a dog means to someone who can’t stand dogs will be different. Always bear in mind that your dream symbols are unique to you.

For me, Charles Bukowski is a figure of authenticity. He was a drunk, a womanizer, and he probably had a host of other distasteful qualities I’m not even aware of and wouldn’t want to possess, but he was committed to his craft. He gave everything he had to writing and he didn’t let anything get in the way. I admire that. I wanted to do the same but didn't have the guts. Instead of going where I wanted, I went where I thought I should. I took the path most obvious and have paid for it ever since in dumb jobs and self-loathing.

No wonder I smoked in my dream. I don’t smoke in my waking life, so the fact that I tried and failed in the night-world is (I assume) a reflection of my attempts to fit in and do the things everyone else does, even though my heart's not in it.

It's a similar story with my dream-state anxiety about being seen in my underwear, a classic metaphor for not wanting to be seen for who I really am--a sell out writer who isn't committed to the craft, hasn’t given it his all, and hasn’t really risked anything. Great art comes from people who've put it on the line. I haven't, so I'm probably going to end up a nobody, like the unnamed guy in the casket, or worse, a lost soul running out the clock in some god-forsaken room, yelling at the tv.

Granted, now that I've taken this terrifying trip though my subconscious I'm hopeful that I'll do something about it, that I'll start taking the creative impulse to write seriously and get the guts to take a god-damned risk or two. Then again, if past behavior is any indication of future performance, I probably won't. I'm not the kind of person who does this sort of thing. Realizing that has made me feel lousy.

at September 18, 2022
Email ThisBlogThis!Share to TwitterShare to FacebookShare to Pinterest