It’s a dark night in a city that’s forgotten about its dictionaries. But on the first floor of a two-story house in Laurellia, one man is trying to find meaning in a world awash in words: Guy Verbose, Existential Lexicographic Investigator. 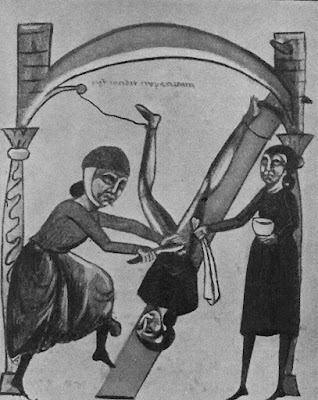 We were late for church, but for once it wasn’t my fault. Today, A and M were the laggards, even though they had been warned the night before that we were going to 8:00 am Mass and then attending the pancake breakfast to say good-bye to Fr. Mark. Obviously, they didn’t care. Against my advice, A and M are following in my footsteps and becoming night owls, and on this morning we we’re all paying for it.

L, a morning person, is the outlier. So, while the kids and I were quiet and prickly as we drove along the Baltimore-Washington Parkway, she was gregarious and bubbly.

“Remember that podcast I was telling you about? This Podcast Will Kill You? They were talking about C-diff and how it can be treated with a fecal transplant,” she said.

L is somewhat new to podcasts, so whenever she finds one she likes, she brings it up in conversation—a lot. I’ve been through this before. First it was Smartest Guys in the Room, a podcast by my brother and a friend of his from high school. Then there was Smartless, with Jason Bateman, Sean Hayes, and Will Arnett. Now it’s “This Podcast Will Kill You,” a show anchored by two grad students named Erin who, according to the show’s website, use it as a way to “share their love of epidemics and weird medical mysteries with the world,” all while “having a cocktail and chatting about pus and poop.”

L is a microbiologist, so the subject matter of the “This Podcast Will Kill You” is right up her test tube.

“A what transplant?” I asked. I clearly heard her say “fecal,” but was aghast.

“A fecal transplant,” she said gleefully. She knew full well that I heard her and that the idea made my empty, early-morning stomach roil. “That’s where they give you someone else’s poop.”

I was able to put that together on my own. Nevertheless, L was right. A fecal transplant, or in scientific terms, a “fecal microbiota transplantation,” refers to the administration of a solution of fecal matter from a healthy person into the intestinal tract of an unhealthy recipient. The aim of the procedure is to change the composition of the recipient’s gut microbiome. It is among the podcast hosts’ “all-time favorite medical interventions.”

In addition to conjuring disgusting mental images, fecal microbiota transplantation has been used to successfully treat recurring Clostridium difficile (or C-diff) infections, which have become a common problem in hospitals. The bacterium is difficult to control in institutional settings and those who develop an infection typically have a hard time getting rid of it.

“Why do they give you poop?” Asked M from the back seat.

“It must be a way for them to introduce good bacteria into your body, to help you fight the disease,” I said, flashing my superficial knowledge of human biology. I hoped the kids would be impressed, but they gave no such indication.

I wasn’t sure the kids knew what a microbiome was. Chances are the people who invented the procedure didn’t know either. Fecal transplants date back to fourth century China, when physicians used it to treat of a variety of conditions including diarrhea, which is also gross. Of course, just because the procedure appears in the historical record does not mean it’s common. If it was, it likely wouldn’t have been the subject of the podcast. Still, records from more recent times indicate that doctors have used fecal enemas to treat conditions like inflammation of the colon since 1958.

The word feces1 has been around much longer than the procedure. Eric Patridge’s Origins: A Short Etymological Dictionary of Modern English (which isn’t short at all) traces the word back to the Latin terms faex, which purportedly refers to “wine-lees,” or “impure residues.” The Chambers Dictionary of Etymology also links feces to faex, but defines the Latin word as “sediment” or “dregs.” As for the English usage of feces to mean excrement, Patridge says this is “of obscure origin.” So does Chambers, but the latter says the use of feces to mean poop began around 1400, when the word appeared in a translation of Lanfranc’s Science of Surgery.

“So, how do they give you the transplant?” I asked. “They must have to insert it in your small intestine or something. They couldn’t put it in your stomach. That would make you sick.”

“I don’t know how they do it,” L said. “I didn’t catch that. I just heard them talk about fecal transplants and I found it fascinating. Don’t you think it’s fascinating?”

A and M laughed. Finally, I was getting through.

“What does that have to do with fecal transplants? She doesn’t have her permit … or C-diff,” I said.

“That’s how everyone does it now. You take a class right before you take the permit test so it’s all fresh in your mind. We need to find a school where we can take the course.”

I groaned in dismay.

“No, it makes sense. I guess I’m just not ready to deal with her driving. It’s all too much.”

L laughed. I smiled. It was the best I could do. I was trying to be funny, but as the old saying goes, there’s a half-truth in every joke. How was A, the little girl who was scared of the sharks in Finding Nemo, old enough to begin driving? Too many years had gone by. Too many changes were taking place. It was too much.

Fr. Mark had been around for eight years, long enough for us become chummy with him, and contemplating his departure reminded me of just how long both he and our family have been hanging around. When we first met him, A was eight. Soon we’d be teaching her to drive, watching her graduate from high school, and sending her off to college. Then she’d be off on her own. Likewise, I was 42 when Fr. Mark first appeared behind the altar. Now I’m 50 and have an AARP membership. I don’t feel that old, but when I think about Fr. Mark’s tenure, recall the priests who said the Masses before him, and did the math, I’m reminded of how many years have passed by. Where had the time gone?

“Don’t you want your daughter to drive? Asked L.

“I think I’d rather have the fecal transplant,” I said.