From the Archives: The Bedeviling Symbol of the Octopus 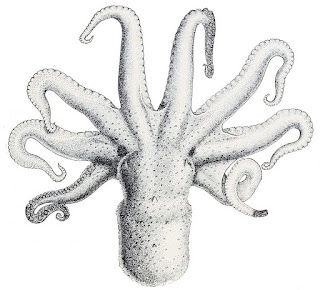 Earlier today, while thumbing through some books in search of blogspiration, I happened to crack the cover of The Dictionary of Symbolism (DoS), where I came across an intriguing entry for octopus.

After teasing the reader with a somewhat poetic description of the beast — "Its arms, depicted as rolled up in spirals, form an impressive symmetry around the body with its two eyes, the whole suggesting a head surrounded by snake-like hair" — the DoS suggests the creature might have been the inspiration for the mythical figures of Medusa and the Scylla, “the mythical sea monster who menaced Odysseus and his crew.” Then the book goes on to talk about the cuttlefish and how the ink emitted by both these animals was deemed a symbol of their ties to “mysterious and otherworldly forces.”

What “mysterious and otherworldly” forces might those be? The book doesn't elaborate, but the implication is that, like the ink, those forces are dark.

Fortunately, there are other symbol dictionaries more willing to lay it on the line. Among them are the Continuum Encyclopedia of Symbols, which declares “Even in earliest times, [the octopus] became a symbol of the spirit of the devil and of hell in general because of its eight tentacles.”

Okay, that’s dark, but what the hell does possessing eight tentacles have to do with the devil or hell? (Get it, possessing?)

[The octopus] … has the same significance as the dragon-whale myth. As a decorative motif…. It is related to the spider’s web and the spiral, both being symbolic of the mystic Center and of the unfolding of creation. It also has been credited with a merely existential significance.


Clearly, Cirlot cares more about dragons than octopi, because one must read that entry to find out just what that "significance" is. I took the time to read the entry for dragon, and I was glad to find it wasn’t wasted.

The dragon … stands for ‘things animal’ par excellence, and here we have a first glimpse of its symbolic meaning, related to the Sumerian concept of the animal as ‘adversary,’ a concept which later came to be attached to the devil.

Now we’re getting somewhere! With it’s odd, alien form and serpent-like appendages for arms, no wonder the octopus was the inspiration for terrifying creatures like Medusa and sea monsters who emerge from the inky deep to imprison us or drag us off into the dark realm they call home. It’s the stuff of dreams, or better yet nightmares!

As a matter of fact, it is the stuff of nightmares. This is why, in addition to symbol references, it’s worthwhile to have a few dream dictionaries hanging around the shelves of your library, for the meaning of the images, icons, and symbols conjured by our minds at night often make themselves known in our dreams. 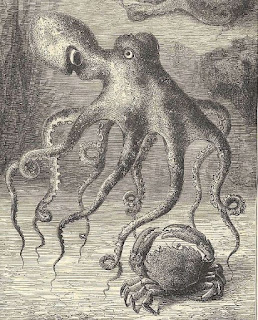 To see what I mean, consider the following excerpt for octopus in The Dream Dictionary from A to Z:

In their positive form, [octopuses] reflect emotional depth and the ability to direct your energy in many directions without losing your center…. [They] may also be associated with a person or situation that has many ways of holding or affecting you, such as a mother or a debt.

The Watkins Dream Dictionary of Dreams offers a similar, albeit slightly more sinister interpretation of the octopi in our dreams. According to this text, dreamed of octopi are noteworthy because:

For a two-handed human, the idea of having eight legs, each with a different function, might suggest an inability to focus on one thing at a time, or a tendency to disperse one’s essential energies in unfruitful activities. Octopi may also be threatening, and indicative of emotional minefields—lunging unexpectedly at a human being from the depths of the ocean.

Crisp’s Dream Dictionary, after echoing the previous sentiments about mothers (um ... what’s that about?), simply notes that an octopus in a dream can “symbolize any unconscious fear” capable of “dragging us into its realm of irrational terror.”

That sounds rather devilish and adversarial to me.

PS.) And what do octopuses have to do with hockey? Find out here!