Acedia: Lost to Neither Time Nor Translation 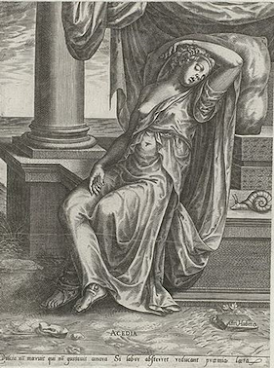 I bristle at being told how or what to feel by the articles I read in magazines or online. I mean, if you want to tell me how you feel, then great, but I reserve the right to determine my own emotional state. I can’t imagine such an assertion is somehow out of bounds, but if it is, I stand by it.

Unfortunately, being told how I feel during the pandemic is only one of the problems I have with the article, “Acedia: The Lost Word for the Emotion We’re All Feeling Right Now” that appeared on the website The Conversation on August 26, 2020. Another, and more significant, issue is that a good portion of the article’s premise — that the word acedia has been “lost to time and translation” — is flat out wrong.

Before I get to that, though, I’d like to assert that I do agree with the rest of the author’s point. Acedia, a word that describes a sort of anxious listlessness, is particularly useful in describing how a lot of people seem to be feeling during this ongoing pandemic. This is understandable. The pandemic has lasted for close to a year and it’s clear from the number of folks I see out and about, a lot of folks have had enough. In short, this pandemic shit is getting old.

Mr. Zecher, who is not so blunt, puts it this way:

No one is posting pictures of their sourdough. Zoom cocktail parties have lost their novelty. Netflix can only release so many new series. The news seems worse every day, yet we compulsively scroll through it.
We get distracted by social media yet have a pile of books unread. We keep meaning to go outside but somehow never find the time. We’re bored, listless, afraid and uncertain.

“What is this feeling?” Zecher asks, forgetting he put the answer in the title of his article. Why, it’s acedia, of course, and as Zecher rightfully points out, humans have known about it since the 5th century, when a monk and theologian by the name of John Cassian took the time to describe it.

A mind “seized” by this emotion is “horrified at where he is, disgusted with his room … It does not allow him to stay still in his cell or to devote any effort to reading.” He feels … “such bodily listlessness and yawning hunger as though he were worn by a long journey or a prolonged fast … Next he glances about and sighs that no one is coming to see him. Constantly in and out of his cell, he looks at the sun as if it were too slow in setting.”

To Zecher’s ears, this description sounds “eerily familiar,” because it “so aptly describes our current state.”

Well, maybe his state, or some people’s state, but not my state. But, again, I get where Zecher is coming from and I get the gist of his article: A dude back in the 5th century wrote about feeling the same way a lot of folks feel now in the 21st — ain’t that a pip! I guess everything old really IS new again.

Yet, Zecher isn’t content to leave it at that. He feels compelled to go a step further and claim, “the name that so aptly describes our current state was lost to time and translation.”

What possessed Zecher to make such a claim I cannot say, but he’s wrong. The word acedia has not been lost to either time or translation. It has been with us for centuries, quietly perhaps, but it’s been there, and the evidence is ample.

To begin, if you really want to know if a word has been “lost to time and translation,” then you ought to consult a dictionary, or better yet, dictionaries. Since I have more than a few, I consulted several to see what they had to say about the word, its history, and use.

I will admit that, when it comes to the term’s use, these are somewhat mixed results. Nevertheless, I think it’s fair to say that a word purported to be “lost to history” would not regularly appear in dictionaries from 1940 to the (near) present.

So much, then, for the word being lost to time, but what about translation? Here Zecher fares a bit better. In his article he notes that, although Cassian’s use of the term makes it “sound like apathy,” a close reading of the monk’s description “shows that acedia is much more daunting and complex than that.” To wit, Zecher defines acedia as the “strange combination of listlessness, undirected anxiety, and inability to concentrate.”

The dictionaries at my disposal aren’t so exacting, but they are rather unified in their association of acedia with physical and spiritual listlessness and/or apathy. The Oxford English Reference Dictionary (2002) defines it simply as “listlessness,” whereas Merriam-Webster’s Collegiate Dictionary defines it as “apathy, boredom.” Things get a little livelier in the Reader’s Digest Great Encyclopedic Dictionary, which defines the term as, “a pathological mental or spiritual torpor” and “sloth regarded as one of the seven deadly sins.” The American Heritage Dictionary plays along and defines acedia as “spiritual torpor; ennui,” and, finally, the National Dictionary provides my favorite definition, “an abnormal condition of the mind, characterized by lassitude, listlessness, and general indifference; the sin of sloth (one of the seven deadly sins).”

Clearly, none of these definitions say anything about “undirected anxiety” or the “inability to concentrate,” although I would argue feelings of “listlessness” would include an inability to focus and stay on task. So, while Zecher may be right that Cassian’s concept of acedia was more nuanced and textured than it seems to be today, it’s a stretch to say we moderns lack sufficient understanding of what acedia means.

It’s an even further stretch to claim, as Zecher does, that the word is “barely used today.”

As Zecher rightfully points out, acedia was commonly referred to as “the noonday demon,” because it was said to impede the ability of monks to concentrate on their studies at this time of day, leading them toward the silkiest of the seven deadly sins, sloth (as noted in some of the dictionary definitions mentioned above). Zecher’s awareness of this phrase, “noonday demon,” is important because it should have tipped him off to the existence of a book by Andrew Solomon titled … you guessed it … The Noonday Demon. This book, which details the author’s experience of severe depression, was published in 2001, was a finalist for the Pulitzer Prize, and thus was both well-known and widely available (I got a copy at a Barnes and Noble). In addition, the religion writer Kathleen Norris authored the book Acedia and Me: A Marriage, Monks, and a Writer’s Life in 2010, which got a fair amount of press in religious circles because Norris is an oblate monk. Given that Zecher is a research fellow at the Australian Catholic University, it seems like he should have known about both these texts. Further, a quick Google search reveals that there are also several other books that discuss the subject of acedia (or at least have the word in their titles), so to say the word is “barely used today,” is absurd.

It’s also worth pointing out that, at least in the cases of Solomon and Norris, these writers don’t just use acedia in their books haphazardly, as a synonym for depression or melancholy. Both authors make it clear they are aware of John Cassian and his writings on the subject and, as a result, both use the term quite deliberately. (I know this because Solomon devotes a couple pages to Cassian in his book and Norris discusses her awareness of the monk and his writings during a 2018 interview with the Biola University Center for Christian Thought. Indeed, the interview is itself proof that word is still in use today.)

Okay, so Zecher is wrong … really wrong … on this last account. Why do I care so damn much?

Well, despite my snark-filled tone, I’m not out to take Mr. Zecher down a peg. (Really, I’m not.) Again, I am not quibbling with his assessment that acedia just might be the perfect word to describe what some folks appear to be feeling as they cope with pandemic-born isolation and inactivity. I will even agree that acedia is likely a lesser-known word compared to its synonyms (e.g., depression, melancholy, lethargy, listlessness, stagnation, and so on.) Nevertheless, what bothers me about Zecher’s take is, isn’t the word’s relative obscurity enough? Why tack on the bit about the word being lost to history or translation when (A) it just isn’t true, and (B) it’s not that hard to prove otherwise?

That said, I want to cut this dude some slack. It’s tough to be a writer these days. There is a lot of competition out there and coming up with a new angle for a pitch is hard. At the same time, I can’t help but feel that after four years of the Trump administration’s lies and scores of politicians and conspiracy theorists taking to the airwaves and social media to spout falsehoods about everything from the election to the COVID-19 vaccine, the world could use a little less bullshit—and I expect people with the title of “researcher” to help us eliminate it.